Picasso
I just have to tell you about the love of my life! We met exactly one year ago! His name is Picasso and he is a stardard Parti Poodle!! I knew Terry from coming into PetSmart to shop for his dogs. Every now and then he would bring one of his own. I always admired his dogs and was impressed that they were so well behaved. A few years later one small puppy became available and I just had to jump at the chance to get him. Over the span of 40 years I have had many dogs and many dog breeds. I have had dogs that ate my walls, ate my carpet, chewed on me, hard to housebreak, and dogs that just weren’t as affectionate that I would have liked. I never imagined that one dog could be so perfect! Picasso is the smartest dog I have ever had. As a puppy he never chewed a thing. I never even knew when he was teething. He is affectionate to the point he is almost human! Loves to lay on my lap and lay his head on my chest. He just loves the affection of strangers and is wonderful with all dogs. He is so special, and so well behaved he goes to the store with me every day! Picasso never gets into trouble, so he has the run of the house at just one year old. He is not a barker and of course doesn’t chew anything. I can’t imagine my life without him and I am sold this is the best breed EVER!!! Charlene and Terry are the most wonderful breeders! I love you both :-).

WATSON
We thank you so much for Watson, he was one year old on July 13. Watson is 27 inches tall at shoulder, not sure about his weight. He is the most laid back pup, you would ever want. He never lets anything get to him. He loves everyone from old to very young. He knows to be gentle with little people. my grand kids all love him. Watson will play ball as long as you can throw. When in the house he will bring you one of his toys, lay it in your hand, you toss it he will bring it back. He is so smart, you tell him what to do and he just does it. Friends come over, they can not believe, i just talk to him.
He is a beautiful panda bear, black and white, everyone that sees him wants to touch him. People ask what kind of dog, all the time, they can not believe he is a poodle. We turn heads every where we go. Watson showers us with love. He wants to be close to his family at all times.
When we were looking , we have a red standard poodle and wanted a black, I talked to the Chapin’s they were having a litter of Parti Poodles. I got on line started looking, we still could not decide. Finally after a lot of looking, we did not want a puppy from a large kennel breeder. We wanted family raised. We decided to get Watson best decision we could have made. He is a member of the family, all the grand kids, and friends grand kids, come over to see Watson. 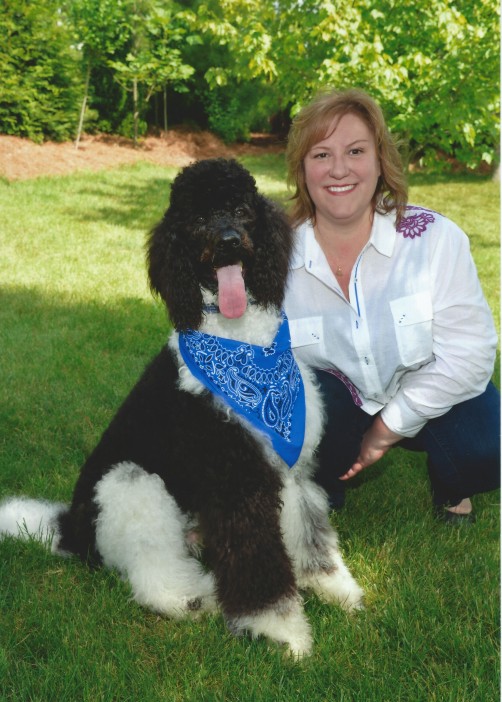 Cass – the meaning of the name is curly headed and clever.

Cass is a right-with-you type of companion. Cass stays with me when I go from room to room in the house or yard, however, he prefers to sit on the floor beside you. He is not a lap dog. We have another poodle which we lovingly say is our poodle afghan; she drapes herself over you in bed or on the couch. She is a snuggler. Cass exhibits his love by sharing activities with you. I worked with Cass everyday on basic commands which he picked up with ease. So much so, I did not need to take him to formal classes. I am a complete dog lover! We have had several other very smart breeds including a German shepherd and Australian shepherds. Cass is the first dog I haven’t needed to take to class and, by far, the easiest to train. When we would practice our basics in the yard, I used food treats, but the real treat was to play ball at the end. He will play ball for hours if you want. He will not pester you, however, if you get tired of playing ball before he does. He is the best retriever I have ever witnessed. He will bring the ball back to me and put it in my lap. It wasn’t hard to point to the ball and then point to my lap and he figured out the only way to play was by not putting it on the ground. If we have guests, he changes who he brings the ball to and tosses it in their lap. His coat is very soft even at one year old. (I keep wondering if it will change as he ages?) It makes me wish I could snuggle with him as well, but if I try, he gives me a look like “hey, I am trying to sleep here”. Our other poodle has more of a coarse coat. We have 3 dogs. Cass does not exhibit any dominant dog tendencies. We have done our part to maintain the dog hierarchy with me being top dog. He loves to play with his sister and plays in a very respectful way. He doesn’t cause trouble so to speak. He has a very gentle disposition. He is by far the most calm dog I have ever shared life with. He has a certain something which allows him to just “know”. When I work from home he sits at my feet, content. If I get up, he grabs the ball as if to say are you up for a game? He is not lazy, he evaluates the situation. This is the part of Cass I love the most. I recognized this early on and cultivated it. It isn’t something you can train into them. It’s his very nature to be calm and he asks what are we doing? His eyes ask with every look, what are we going to do next and what is my role. I loved my German shepherd, he looked, evaluated and reacted. He was so smart! The part I didn’t know would be so wonderful and different, was the extra step where Cass asks me first if the reaction would be okay. For instance, I took him to a friend’s house and there were dog toys on the floor. I saw him looking at one, he looked up at me and I said no, stay. He layed down. The German Shepherd would have probably just gotten up and got the toy thinking it was fine. “That’s what they are there for right?” That’s what his eyes would have told me. We didn’t lose anything to Cass’s puppyhood either. I have dining room chairs with some skinny legs due to chewing from his sister. No amount of antlers or toys deterred her chewing. Not even the bitter apple spray did the trick. Or perhaps she knew I wanted new ones. They were my husband’s before we got married, I hate those chairs. It’s probably my fault. 😉

I am glad to see Charlene and Terry posted a picture where you can see into his eyes. If you are a dog lover like me, I think you will recognize that special look.

Hi, I want to thank you so much for Mia. (I kept her name as she seemed to know it when she arrived). The Chapins were so patient with me during the purchasing process, they were very helpful in answering all my questions and she is exactly as they described.
Mia is a calm, patient girl. She doesn’t bark unless necessary. She is very kind and loving and best of all she LOVES my grandkids. My 2 year old gkid loves her to pieces and I worried that she plays too rough. But I couldn’t keep them apart and realized Mia loved it and is quicker than my gkid. So Mia knew exactly how to play with her. Mia’s tale is constantly waging when the gkids come.
She loves to retrieve and play the “find it game”. At first she thought it might be fun to chase chickens and ducks.  I just had to tell her “No” once and she somehow understood they belong. She has not bothered them since.
Mia is still pretty black but I think she will be a Blue.
She is 27″ and weights about 50lbs. She is perfect in every way.
Thanks again,
Gwen

Many people do not realize that parti colors were an orignal characteristic for poodles. Using our dogs for service work, we appreciate these traits, social, intuitive, color, size, structure and retrieval instincts. We so appreciate Mandy. She is big, beautiful, loving, healthy, super smart and full of energy. She is a great addition to our breeding program. I know she will be a great mom.
Barb